My May in North-Asia (in English)

May in North Asia! That I have waited! I travelled lying in my sofa in Ukraina during March and April and read about 30 books from there. Now it was time to fly to the East! I have to confess, I read 9 books from Ukraine again. Now it has to end. But I have still some books left from there. One is verse novel. I Also read some books from Europa and nine children books etc.
China I read tree more books by Qiu Xiaolong When Red is Black and A Case of Two Cities. and Red Mandarin Dress. I have read first 2 books of this serial before and enjoyed a lot. I like poems and Shanghai would be nice to visit... But not now, because of corona-virus.
Ikkyu Wild Ways : Zen Poems of Ikkyu. Kai Nieminen has translated poems from China. Some poems of this book is from China some from Japan. So I don't know if this is really same book that the English one is, but I hope your is as good as mine.
Po Chü-i Selecter poems of Po Chü-i. My book has translated from China by Pertti Nieminen who has selected also poems. So the books are not exactly the same, but almost. 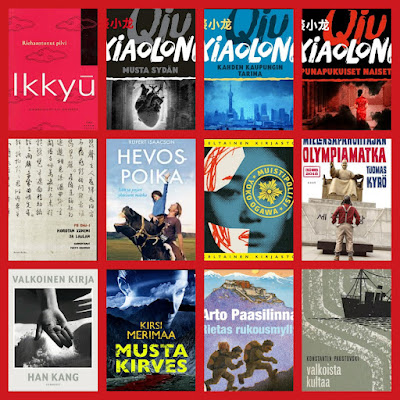 Japan Yoko Ogawa The Memory Police. When the book was new I did not like the cover. But I am very glad, that I read the book. It was good - even while the future in the book was not nice at all.
Kyrgyzstan Kirsi Merimaa Musta kirves (The Black Axe) is not translated in English - unfortunately. Finnish woman moves for working in Kyrgyzstan. She is EU-diplomat in Kyrgyzstan and Kazakstan. Some European workers dead by murder and she try to find why. Love is in the air. Nice book, unfortunately only in Finnish.
Mongolia Rubert Isaacson  The Horse boy, the true story of a father's miraculous journey to heal his son. I got this book from my friend about a year a go. I am not a horse-girl, so I but it below all books. Now I need a book about Mongolia and find out that this was it. Amazing book. I so want to travel to Mongolia!
South Korea Tuomas Kyrö Mielensäpahoittajan Olympiamatka (A trip to Olympic games by the Man who Regretted his Mind). "Mr Mindregretted" (not exactly Mind-boggling, because this man can learn also, that he is wrong) is very famous book serial in Finland. There is short stories and novels. This was a novel, where father flies to Soul to visit her daughter, who works in Soul, South Korea. Book is funny, but it also push you to think how different world was when your father was young.
Han Kang The White Book. I do not know why I begun to read book about white colour, but I liked it. I think I read one of Han Kang's books also in last year.
Tibet Arto Paasilinna Rietas rukousmylly (The Lewd Prayermill or The Salacious Prayer Wheel those words are not easy to translate). Arto Paasilinna is one of Finland's most translated authors. The Year of the Hare is his most famous novel in English and France.
Turkmenistan Konstantin Paustovsky Kara-Bugaz. Kara-Bugaz won prizes in 1930's when it was new. Paustovsky was nominated for Nobel-prize of literature in 1965, but Mihail Solohov get that prize. Book was kind of beautiful to read. In the novel there is inside of book some short stories about history of Turkemenistan. In Finnish the name of the novel is White Gold. Part of the sea is not wasted, instead it is very valuable.
12 Books, 7 countries
Kirgyzstan was new country for me.
klo kesäkuuta 22, 2022 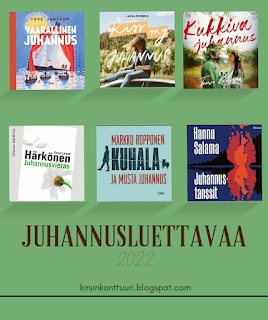